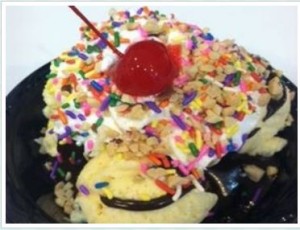 According to an article in the East Valley Tribune, a popular local Chandler restaurateur has encountered a string of setbacks recently and can use some extra support at his restaurant. The name of the establishment is Wimpy’s Paradise, which is located at 48 S. San Marcos Place in Downtown Chandler.

I checked out the website for Wimpy’s. They have some very interesting menu items including a Grilled Peanut Butter and Jelly sandwich. The dessert pictures leave little to the culinary imagination. See the Hot Fudge Sundae image included with this article.

The proprietor of Wimpy’s is a gentleman by the name of Randy Walters. He also owned Pittsburgh Willy’s, which is temporarily closed for relocation. According to the article, Randy had his Custom Hot Dog cart stolen, then his receipts for the week went missing, and to top that off, he suffered a cardiac issue.

Are you interested in living in Downtown Chandler? Have a look at these homes.

We conform with the Fair Housing Act that prohibits discrimination in housing based on color, race, religion, national origin, sex, familial status, or disability.